On November 10, 2017, one of an elite group of American servicemen received a special visit for Veterans’ Day, and a U.S. senator got to meet someone he’s admired for years.

“Mr. Shay? What an honor to meet you, sir,” said Sen. Angus King, as he and a few members of the tribe, family, and friends gathered at the historic teepee building on Indian Island. They were there to honor Charles Norman Shay, who arrived with a silver topped cane, and wearing a tidy, dark suit dotted with military badges and medals.

He joked that all he’d been told about the day was to show up and look good.

But Shay is one of a small handful of surviving Wabanaki elders who bore witness to some of the most dramatic moments of World War II.  Shay points to one badge on his chest. “This is the emblem for the 1st U.S. Army infantry division,” he explains. “It was with this unit I first entered France on the 6th of June, 1944.” 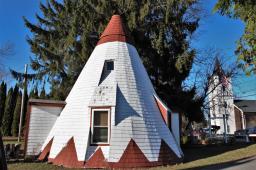 Shay was just 19 years old when he found himself in the middle of one of the most famous battles in history: Operation Overlord,  better known as the D-Day landings at Normandy. Although it was more than seven decades ago, and Shay has been called upon to tell the story many times before, his voice still broke when describing the experience of landing on Omaha Beach at 6:30 in the morning, with the first wave of the assault.

“We were under heavy machine gun fire and mortar fire and many of the men were killed immediately when the ramp went down because they were standing in front.”

Shay, who was serving as an army medic, says some soldiers were simply pulled down by the strong currents and drowned under the weight of their gear. Others were killed outright in front of him. “I had no idea. I had never seen anything like it before,” says Shay.

But his job was to plunge into the chest deep water to try and carry out those who could be saved, which he did repeatedly, with bullets flying through the air. “I was fortunate to make it and I attribute my life that day to the prayers of my mother. I knew she was praying for me,” said Shay, his voice breaking again. “But of course many mothers were praying for their sons and they did not come back.”

Before the war was over, Shay would spend about a month as a prisoner at a German camp. He was later awarded a Silver Star for his bravery at D-Day, as well as a Legion of Honor medal from France. He would also go on to serve in the Korean Wars and earn four Bronze Stars for his service.

“Charles is a very dignified elder in our community. He holds himself with a lot of composure and he doesn’t want it to be about him,” says James Francis, Director of Cultural and Historic Preservation for the Penobscot Nation.

Francis, along with family and friends arranged the surprise gathering for Shay, who he says remains gracious and modest and doesn’t like to talk about himself as a hero. But with Shay’s 94th birthday just a few months off, and more than 300 World War II veterans passing away each day, Francis says it’s more important than ever to listen to their stories while it’s still possible.